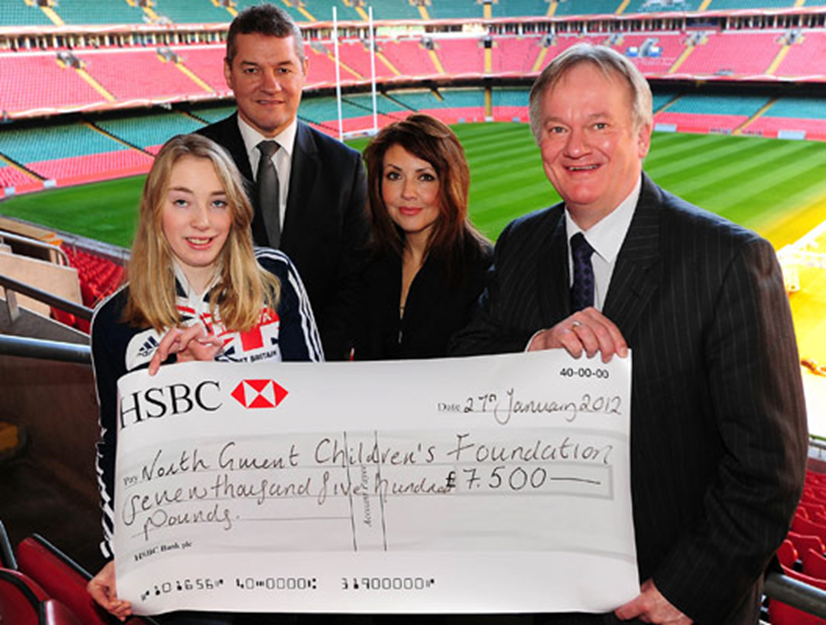 The MSCT, which generates its income from a levy on ticket sales at The Stadium, has reached the significant milestone in support of projects throughout Wales relating to sport, the arts, the community and the environment.

South Gwent Children’s Foundation Sparkle Appeal are the latest beneficiaries, receiving £7,500 to support their Sport for all Project at a special cheque presentation at the Millennium Stadium.

The funds, which represent the £4 million landmark investment in community projects, will allow severely disabled children the opportunity to participate in regular sporting activities at Newport’s Serennu Children’s Centre.

Chairman of the MSCT, Russell Goodway, paid tribute to the Foundation and thanked the Welsh public for making this grant giving possible.

“On behalf of the The Trust, I am delighted to donate this landmark cheque to the South Gwent Children’s Foundation Sparkle Appeal which is committed to brightening the lives of some very disabled children by providing sport equipment that has a life span for years to come demonstrating the sustainability for the future,” said Mr Goodway.

“The Trust has now been able to distribute £4 million to more than 685 individual projects in every local authority area in Wales and to make a real difference to people’s lives, especially those most at need and at risk.

He added: “It is thanks to the public who have purchased tickets to events at the The Stadium we have been able to make a real impact on the ‘well-being’ of the nation and inject funds back into the communities that have generated them.”

In recognition of the huge support from rugby fans supporting their national team at the city-centre stadium, the MSCT has contributed £500,000 to grassroots projects in rugby clubs across Wales.

WRU Chairman David Pickering commented: “The outstanding support we receive from the Welsh public at The Stadium events allows for significant funds to be invested in the support of charities and good causes at grassroots level.

“Throughout the past year, the fans have supported a host of major events, including two Take That concerts, a Michael Jackson Tribute and the FIM British Speedway Grand Prix as well as the Six Nations tournament and the August and December rugby internationals and I can think of no better way of saying thank you than by putting something back into the communities that support us.

“The milestone of £4 million is evidence of the high level of successful activity taking place within our stadium and is a tribute to those who give their time to make a difference to others.”

Sparkle Ambassador and 2012 Paralympic hopeful Jenny Mcloughlin said: “Sport helps people to gain confidence, build new friendships and encourages team work and I am delighted to receive the MSCT funding on behalf of Sparkle, the organisation that encourages disabled and able bodied friends to come together as equals.”

Always aware of the increasing difficulties facing voluntary organisations in Wales, the Trust is keen to provide applicants with a clear and simple process for making their cases for funding.